Personally I don't like the dichotomy being expressed by some Hillary fans claiming to support "evolutionary" over "revolutionary". It supports the Bernie Bros claim that she's into the status quo and "incrementalism." It's counterproductive. 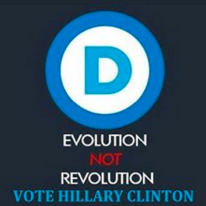 It's also not true that Bernie promises something fundamentally different than Hillary does. They both seek to achieve the same goals. She wants to remove money from politics. She wants college to be affordable. She wants to prevent the financial industry from harming society or the people in it. I cannot think of a single Bernie goal she doesn't hope to pursue.
What she doesn't do is call people enemies and frauds. She doesn't speak in language of destruction and anger. She talks about planning, information and thoughtful policy. Considering where our country is today, that is the real revolution.
Bernie is, in fact, moving in the direction of the main political perspective. The entire Republican party speaks of enemies and destruction. They talk about groups of people who are bad. For the R's it's Moslems and Mexicans. For Bernie, it's "the business of Wall Street is fraud." Like theirs, his entire political strategy is dogma. The same five ideas repeated again and again and again and again. If you don't buy into them as expressed, you are reviled.
Viewed from the meta-perspective of how they want to operate to address the country's problems, Bernie and the R's have much the same strategy, albeit with very different goals. Hillary, different from the mainstream politicians and talking heads, is the revolutionary. She's the one who proposes respect. Respect for knowledge, expertise, collaboration and the political process.
So, this idea that Hillary represents a marginal, incremental approach is just wrong. She emphatically rejects the dogmatic, ideological and bitter strategy of the past - of Bernie and the R's.
She presents a new way of doing things - being smart, adaptable and collaborative. That's my kind of revolution.