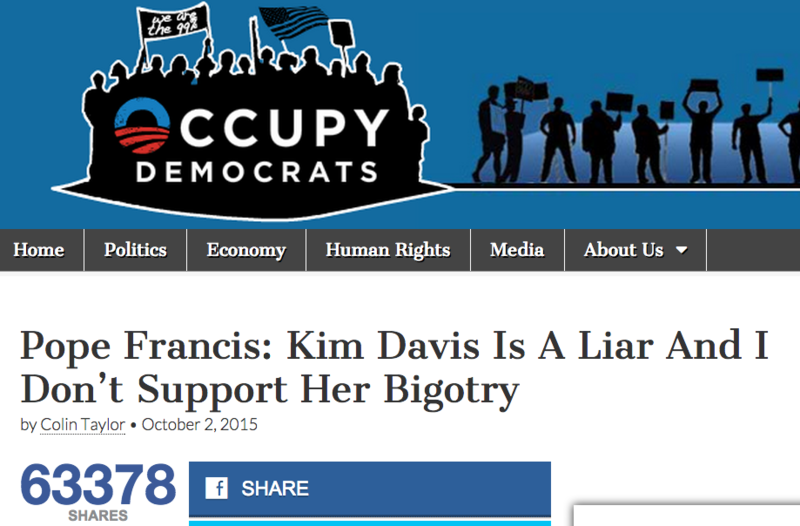 This story false and I am not happy to see the liberal websites publishing it. Pope Francis, via the Vatican spokesperson, made an assertion about the meeting that differs from that of Kim Davis. He did not say anything about her lying or not and it is simply wrong to say he did. He could be thinking that she misinterpreted, or was deluded, or any of a number of things.

He did not say he didn't support her bigotry. He said he didn't want his actions to be used for political ends. He met with gay people. He also said that conscientious objection is a human right. He made no comment whatever about her, her cause or her actions. None.
In the article is says that he did not tell her to "stay strong" but he has not said anything about that either. Not a single word. He, in fact, might have said it in the context of the non-specific experience they said that she had with him.
I'm under no illusions that the right wing media make stuff up all the time. When I see an assertion published by Fox or Townhall or Mediaite or MichelleMalkin, I do not consider the 'facts' they assert to be any more than expressions of their opinions and wishes.
I am increasingly feeling the same way about media on the left and this is an example. People who see this article are now walking around repeating 'facts' that are specifically, 100% untrue. They are wishful inferences drawn from much less specific stuff.