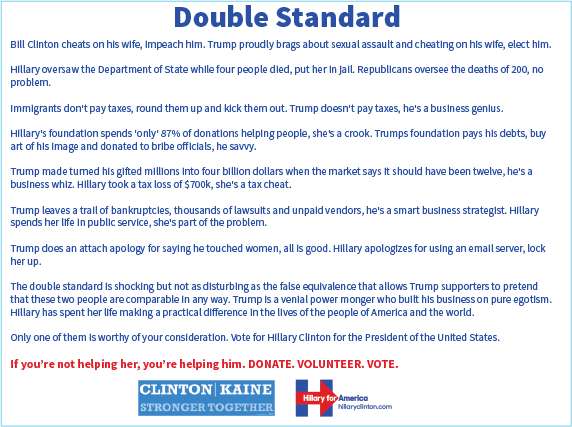 Bill Clinton cheats on his wife, impeach him. Trump proudly brags about sexual assault and cheating on his wife, elect him.

Hillary oversaw the Department of State while four people died, put her in jail. Republicans oversee the deaths of 200, no problem.

Hillary's foundation spends 'only' 87% of donations helping people, she's a crook. Trumps foundation pays his debts, buy art of his image and donated to bribe officials, he savvy.

Trump made turned his gifted millions into four billion dollars when the market says it should have been twelve, he's a business whiz. Hillary took a tax loss of $700k, she's a tax cheat.

Trump leaves a trail of bankruptcies, thousands of lawsuits and unpaid vendors, he's a smart business strategist. Hillary spends her life in public service, she's part of the problem.

Trump does an attach apology for saying he touched women, all is good. Hillary apologizes for using an email server, lock her up.

The double standard is shocking but not as disturbing as the false equivalence that allows Trump supporters to pretend that these two people are comparable in any way. Trump is a venial power monger who built his business on pure egotism. Hillary has spent her life making a practical difference in the lives of the people of America and the world.

Only one of them is worthy of your consideration. Vote for Hillary Clinton for the President of the United States.

If you’re not helping her, you’re helping him. DONATE. VOLUNTEER. VOTE.