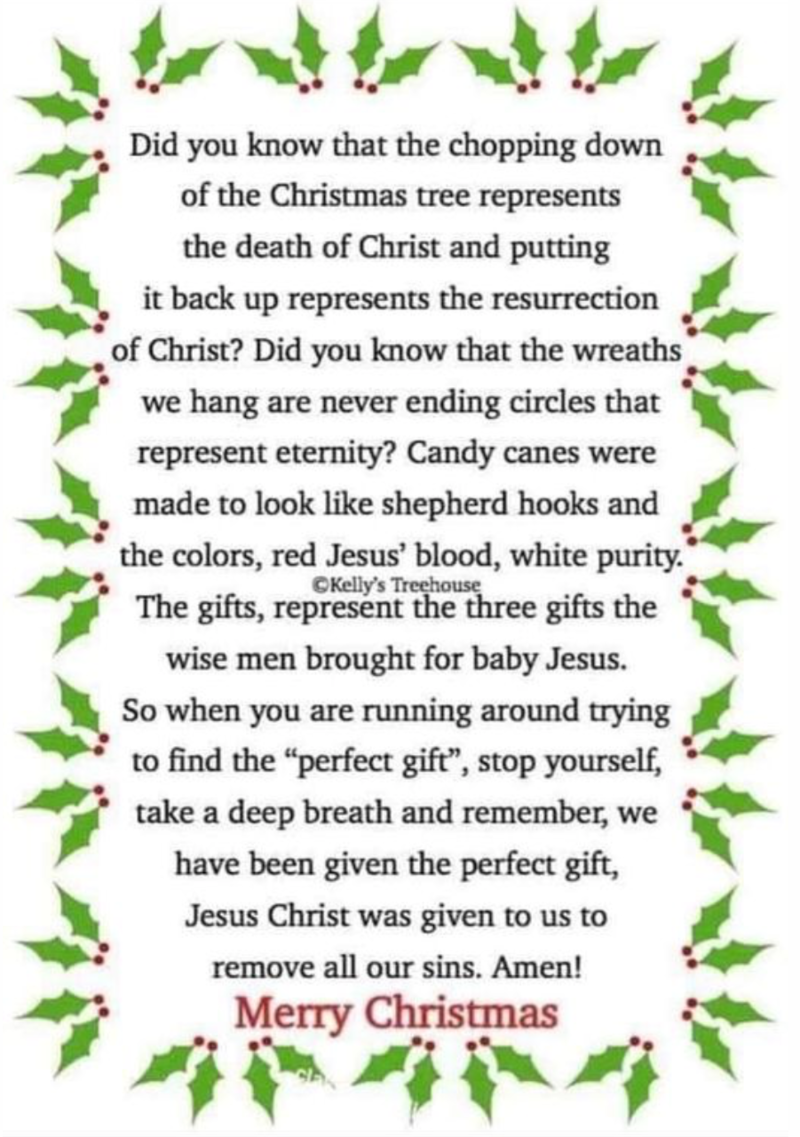 I been seeing this bit of Christmas revisionism around a lot lately. While I am happy enough for anyone to make up whatever fantasies they need to support their self-image and happiness, my self-image and happiness requires that I take note of the fact that these ideas have no historical merit. They are modern creations.
Christmas trees came to us as first from Yule celebrations as 'yew branches' in the 1700's which then graduated to entire trees, often pine. Though common in England, the fad for trees came to America when magazines started existing and loved to have articles about the spruce trees Queen Victoria's consort, Prince Albert brought from Northern Europe where Yule celebrations were common. Applying a symbolic death and resurrection to the trees is a completely modern innovation.
Candy canes are shaped that way because the ropes of candy are hung over rods like pasta and harden into a U shape. They are broken into two pieces. One has a bend at top. The other is straight. There might have been some candy company that was thinking religious blood thoughts when they made the red stripes but the white color is the color of the cooked sugar mixed with air.
Yule, like the Saturnalia was celebrated at the solstice and both were big parties with. Saturnalia was Roman so it didn't have pine trees but they did have wreaths which were probably there because they wanted greenery in the winter season, and like Yule, they also had gifts.
Around the fourth century, the western (Roman) Christian churches moved Jesus' birth myth from the spring (the time of year when the sheep and shepherds mentioned in the story would have been around) to coincide with Saturnalia, probably to coopt it into Christianity.
Interestingly, Christmas was not considered a big deal of a holiday until the 1800's. In fact, it was outlawed as an immoral and dangerous party by British Puritans in the 1600's. It came into it's own, I have read, when the industrial revolution encouraged three innovations.
The first was the magazines mentioned above. Articles about the royal court were very popular among the reading classes in America. So was British royalty. By around 1804, Christmas was fashionable again because Queen Victoria liked it.
The next was that childhood became a thing. Before factories, children were worked in the family business/farm like everyone else. With the industrial era, work required expertise. It also created some prosperity. Children were neither able nor expected to work when little (among the elites, blah blah blah). Consequently, they became entertainment for parents and the notion of 'our precious child' came into fashion.
The last was the production of consumer goods. It was around that time that factories started producing meaningful amounts of stuff that were not tools but could provide amusement around the house. This included toys and other things for children.
These three, the fascination over Queen Victoria's tree centered Christmas celebration, the solstice gifting that accompanied Yule and Saturnalia (even though they had no Magi), and the desire to make children happy combined to produce a uniquely American celebration, ie, a capitalist orgy of buying, giving and consuming. The religious significance was always a distant consideration, if not a mere marketing excuse.